What is your first run memory?

Shawna: December 16, 2000 – Jog’r  Egg Nog’r  5K   Eggnog was served after the run…and yes, I had the leaded Egg Nog.  I started the run with my sister, who about a mile into it told me go on, she was going to walk the rest.  I remember coming into the home stretch of the run and seeing a photographer taking pictures of all the runners.  It totally motivated me to finish strong- LOL- I was not going to have my picture reflect me crawling across the finish line.

What is your proudest run moment? 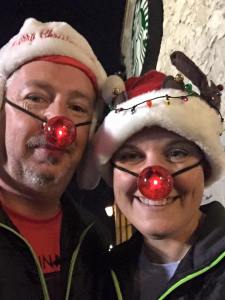 Shawn: Hot Chocolate 15K – 2013  It was my first 15K run and I did it with my son.  We lived in OK at the time and we had trained for several months.  I remember traveling down and telling my son “I am so not prepared for this!”  He just looked at me like I was crazy and said “You are underestimating yourself.”  We ended up doing mile repeats walking through the water breaks.  It was a great run, we laughed and talked through the whole run.  It was not a fast run, but I wouldn’t have had it any other way.  I was so proud of us for all the training we had done and the strong finish we had.

Scott: That is a difficult question to answer, there are so many but I can narrow it down to two moments that really stand out.  My first race which was a 5K in McKinney for Little Hearts Of Hope where Shawna and I both finished in the top of our age bracket by Run/Walking. Crossing the finish line with Shawna was an amazing experience.  One of key things that I have decided is that I am not interested in chasing a race, I want to run a race because I am ready and not because of a date.  There are many runners who pick races and use that as a motivation to train, but for me training for distance and then picking a race is the way to go.

The second proudest run moment for me was my second run, three days after my first run.  I was sore, my muscles ached and it would have been so easy to throw in the towel.  But I did it, Shawna was there supporting and encouraging me.  My MRC family celebrated each milestone on my running journey from my first mile and all the miles after.  We runners are an amazingly unique bunch. We support, celebrate and encourage new runners (everyone started here) as much as we do ultra athletes. There’s no mileage too low or mile time too long.

What is your most memorable race?

Shawna: My most memorable moment to date is the 2014 Little Hearts of Hope 5K that was held here in McKinney.  When I first met Scott he was not a runner and was VERY adamant that he was not going to become a runner.  He was very supportive of me running, but he wanted nothing to do with it except support me.  About four months after we moved to McKinney (last May) he shocked me out of the blue one day and said “I want to run with you and do a 5K, but I will not chase a race.  And this isn’t for you, it’s for me.  I just want to run with you.”  So he started training with me. I run/walk so it was a perfect way for Scott to get started.  Then last December out of the blue he says “Sign us up for the Little Hearts of Hope 5K.  I want to run that with you.”  We did the run, both of us placed in our age/gender division.  And Scott has been running with me since.  : )

What are your next running goals?

Shawna: In February I am doing the Hot Chocolate 15K again, very excited about doing the run again.

In May, we are traveling to California and I am doing the Disney Tinkerbell Half Marathon.

And possibly sometime in the middle of training for the undetermined marathon, I just might squeeze in another half with Scott, maybe a virtual run if we can find one.  Maybe.

Lots of goals this year and I am VERY excited about running in 2016.

Scott: I am wanting to begin to increase my mileage to complete a half before the end of the year with Shawna.  I haven’t picked a race yet, but December of this year is looking good.

What is one piece of advice you can give to a new runner?

Shawna: Try a run/walk regimen.  It’s a great way to get started and work your way up.  It is also a great way to prevent injuries as well as return from an injury.  I started out doing 30 second run/30 second walk.  I have slowly worked up to 1:45/45. As the year goes on, I would like increase these times a bit as I continue to get stronger.  Regardless of any increase in interval time, I am still faster than anyone sitting on a coach.  And that is what I focus on.  Just keep going at a pace that is comfortable for you.

What is the one piece of advice you can give a new runner?

Scott: Start at your own pace, find your base distance zone and don’t chase mileage in your first month.   It is easy to listen to the runners around you talk about distances 10, 15, 20 mile runs they do regularly, but remember they have been training for a long time.  Start in your comfort zone, run until you can’t and then push yourself a tiny bit further further, maybe a minute or two.  I started by run/walking one and two miles three times per week.  One last thing, try and run with a group as much as possible. It is much easier to get motivated with a group than alone.  Those last few miles you struggle through are much easier to accomplish together.

What is your biggest struggle with running to date?

Scott: Early Saturday morning runs by far.  Shawna can impersonate my Saturday morning head shaking and talking to myself word for word.  “Why would anyone get up this early” or “this is just plain wrong to be up this early on a Saturday” and then the drive to Market Street is full of “why’s”.  As soon as my foot hits the pavement on my first stride, all is good in the world.  With each stride I take I can feel the weight of the week’s events slipping away.  As soon as I finish my Saturday run I turn to Shawna and say “I feel amazing and thank you for introducing me to running”

Do you remember the first moment you felt like a runner?

Scott: It was a cold and blistery evening run in December, the real feel was 20’ish.  I was getting ready, shorts over running pants, long sleeve mock turtle neck along with a long sleeve running shirt, headband, not one but two headlights, gloves and my running cap.  Nothing matched, but I was going to be warm and I was going to run.  I looked in the mirror and it was at the moment that I realized I am a runner.